Chicano Artist Jose Lozano, whose drawings and paintings have been exhibited widely, prefers to work in a series and focuses on particular themes and topics, such as Mexican wrestlers, paper dolls, Mexican movie imagery and clowns. 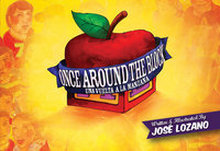 There’s always a lot of action in the Mexican American neighborhood where Mr. Lozano lives. Amelia argues with Anita; Benito loves bean burritos but not bumblebees; Hortencia and Herminia hover around like hummingbirds; and Zacarias is catching some Zs on Zachary Street. José Lozano’s wacky little stories and illustrations combine Mexican culture with Sesame Street smarts to make for a wonderful read-aloud ABC book in Spanish and English.

Little Lily Lujan--a.k.a. "Little Chanclas"--loves her chanclas, clickety-clacking her way through life. She may be tiny but you can hear her coming from a mile off. Then her chanclas come apart while she's dancing at a party and the dog chews them up. Poor Lily is inconsolable. How's she going to face life without chanclas?

Available in Hardback or Paperback in Spring 2014
Available at Cinco Puntos Press
Chicano Artist Jose Lozano is based in Fullerton, California, his works include paintings, murals and serigraphs.